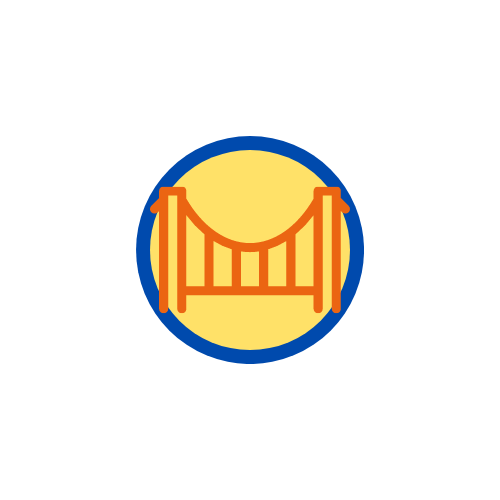 Building Bridges will emphasise the importance of the different types of communication. This activity will activate the communication skills of each student and the collaboration between individuals and teams. Students will learn how to effectively communicate, listen and act accordingly.

You can also use popsicle sticks and tape.

Be aware that all teams must have access to the same materials.

Each team is responsible for the construction of a part of the bridge crossing a river, without continuous communication between the teams.

Instructions for the teacher

Prepare this lesson by choosing three or four separate locations, where students can build their bridges without seeing or hearing other teams.

Divide the students in an equal number of  teams (2 or 4 teams depending on the size of your class).

Explain the problem: The students are inhabitants of two / four cities, which are separated by a river. After years of discussion, the municipalities on the two sides of the river have agreed to finance the construction of the bridge to cross the river: each city will be responsible for building one part of the bridge. However, there is a problem: it is impossible for the cities to maintain continuous contact during the construction process.

You, as a teacher, monitor these meetings as a neutral mediator. You will not take sides but guide the decision-making process and take pictures (if you like).

Finally, explain to the group that all parts of the bridge should look the same.

Rules for the teams

Each team will work in a separate space from which it is impossible to see or hear the other groups.

Each group has the same materials available to build their part of the bridge.

All parts of the bridge must be symmetrical and in the end the bridge should cross a river of one meter.

Once the bridge is connected, it must be able to bear the passage of a toy car.

The group needs to decide on the height and width of the bridge.

Allow 5 minutes per team to choose a spokesperson and divide tasks.

At the beginning, all spokespersons are invited to a 3-minute meeting to discuss their approach. It is only allowed to speak, not to exchange designs or materials. After this first meeting, the teams have 8 minutes to listen to the spokesperson and work on their part of the construction. Now, the spokespersons have another 3-minute talk about their approach, in order to deliver constructions which are equal. After this second meeting, the teams have another 8 minutes to adjust their design and build the bridge.

All teams get together and present their part of the bridge. You will collect the separate parts and assemble the bridge, followed by a test ride of the toy car. Is the construction of the bridge strong enough?